Last year, I felt very honored and privileged to be able to attend an event at the Turner Classic Movies Film Festival – it was a screening of “How Green Was My Valley” and Maureen O’Hara was there! She did an interview on stage before the movie, which was hilarious (if you have a chance, check it out on the TCM site or YouTube). As you can see from the picture above, even at 94, she was still a very beautiful woman – and so striking with that red hair. Technicolor or not – she was stunning. She was my ideal of what an Irish woman looked like.

Maureen O’Hara has always been one of my favorite actresses. I was saddened to hear that she passed away today at the age of 95 – surrounded by her family and listening to music from “The Quiet Man”. I love that fact – even if it is a bit of Irish propaganda. I think for me – despite all of the movies that I have seen her in – she will in some way always be Mary Kate Danaher. It’s one of those roles that is a perfect fit for the actress who played it – a fusing of the two – where you can’t really tell where one ends and the other begins. She is that character in some way. And it’s interesting that she always considered “The Quiet Man” to be her favorite film. It’s one of mine too – and every time I visit Ireland, I have to make a stop in Cong (the town they shot the film in). To me, that is what I think of when I think of Ireland.

There will be many tributes in the days to come, I’m sure. She really was one of the greats of Old Hollywood – and appeared in truly some of the best movies ever made. But I also loved her no-nonsense attitude – and her stories! She had that Irish sensibility for storytelling – and true or not – she certainly could spin a good yarn. It made her that much more fascinating and in a certain way, relatable. She will be missed. So tonight, I will be watching “The Quiet Man” and tipping back a glass (or three) of Jameson – with a “Sláinte!” in honor of the Irish lass from the silver screen.

Maureen O’Hara, ‘The Queen of Technicolor,’ Dies at 95 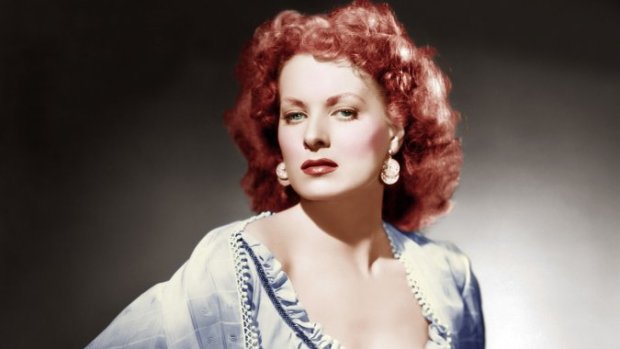 Maureen O’Hara, the Irish beauty whose striking red hair, crystal-green eyes and porcelain skin was so dazzling on the silver screen that she was dubbed “The Queen of Technicolor,” has died. She was 95.

O’Hara, who played the feisty wife to onscreen husband John Wayne in five films — three of them directed by John Ford — died Saturday at her home in Boise, Idaho, Johnny Nicoletti, her longtime manager, told the Associated Press.

“She passed peacefully surrounded by her loving family as they celebrated her life listening to music from her favorite movie, The Quiet Man,” said a statement from her family.

She moved to Idaho in 2013 to be closer to her children after spending four decades in Glengarriff, Ireland.

That oversight was rectified when the Academy announced she would receive an honorary Oscar at the Governors Awards in November 2014.

Meanwhile, she helped Ford collect two of his four career Oscars by starring for the legendary director on the best picture winner How Green Was My Valley and The Quiet Man.

“I knew what great directors and great actors were like,” she said of Ford (whom she called “Pappy”) in a 2010 documentary about the making of The Quiet Man, “but I have to honestly say he was the best, really the best. The meanest.

“Believe me, I would rather work with the — pardon me — the old bastard than not.”

In such Technicolor films as To the Shores of Tripoli (1942), the swashbucklers The Black Swan (1942) and The Spanish Main (1945) and The Quiet Man, the vibrant O’Hara pops off the screen. “Framed in Technicolor, Miss O’Hara seems more significant than a setting sun,” The New York Times once said.

She received The Queen of Technicolor nickname from Dr. Herbert Kalmus, who invented the process.

Born Aug. 17, 1920, Maureen FitzSimons developed an early interest in acting, auditioning for the Abbey Theatre School as a teen. Winning numerous awards and local attention, she earned a screen test in London and had one line in the British musical comedy Kicking the Moon Around (1938). She then landed her first noteworthy part in Alfred Hitchcock’s Jamaica Inn (1939), starring Charles Laughton. The actor suggested she change her name to O’Hara.

In 1939, she set out for Hollywood and had a champion in Laughton, who claimed to have “discovered” her. She was featured in his next movie, The Hunchback of Notre Dame at RKO, in which he starred as the inimitable hunchback Quasimodo while she played Esmeralda.

Her casting by the Irish-American director Ford in Fox’s How Green Was My Valley won her wide notice and critical recognition. The film, about a struggling Welsh family in a mining town trying to hold onto their way of life in the face of the Industrial Revolution, won the Oscar for best picture as Ford was given his third Academy Award. O’Hara was charismatic as Angharad Morgan, the most beautiful girl in the valley.

O’Hara was then cast in two big pictures in 1947 — Sinbad the Sailor opposite Douglas Fairbanks Jr. and Miracle on 34th Street, the sentimental Christmas classic in which she plays 8-year-old Natalie Wood’s mom. (O’Hara noted that she played the mother to almost 40 children during her career.)

In 1950, she starred with Wayne for the first time in Ford’s post-Civil War gem Rio Grande. Two years later, she starred in The Quiet Man as Mary Kate Danaher, an Irish lass in rural Galway County who is wooed by an American boxer (Wayne), much to the displeasure of her protective brother (Victor McLaglen).

“I loved Mary Kate Danaher. I loved the hell and fire in her,” she recalled in her 2004 autobiography, ’Tis Herself. “She was a terrific dame, tough, and didn’t let herself get walked on.”

She met with Ford often before filming. “In the very beginning, the first role I played in The Quiet Man was not Mary Kate Danaher, but that of John Ford’s muse,” she wrote in her book. The two got along famously, even though the director socked her in the jaw during a party in 1944. She never knew why he did it.

O’Hara appeared in 18 films in the 1950s. For At Sword’s Point (1952), which starred Cornel Wilde as D’Artagnan, she trained with a fencing coach for months and did her own stunts.

She took on more mature roles in the 1960s, playing Hayley Mills’ mother Maggie McKendrick in The Parent Trap (she was incensed that Walt Disney ignored her contract and instead gave Mills top billing) and the wives of Jimmy Stewart and Henry Fonda in Mr. Hobbs Takes a Vacation (1962) and Spencer’s Mountain (1963), respectively.

O’Hara starred with Fonda again in the 1973 NBC telefilm The Red Pony and in 1991 made a return to the big screen, starring as John Candy’s overbearing mother in Chris Columbus’ Only the Lonely. (She said that Candy reminded her of Laughton.) Her last credit was as the star of the 2000 CBS telefilm The Last Dance.

O’Hara also could sing. She showcased her soprano voice on the albums Love Letters From Maureen O’Hara and Maureen O’Hara Sings Her Favorite Irish Songs and as the star of the 1960 Broadway musical Christine.

O’Hara was married three times, most recently to aviator Charles Blair, whom she wed in 1968. They had a daughter, Bronwyn. When he was killed in a plane crash in 1978, O’Hara continued to manage his commuter seaplane business, Antilles Air Boats, in the U.S. Virgin Islands and published Virgin Islander magazine.

Earlier, she was married to producer George Brown from 1939-41 (that union was annulled) and director Will Price, who she said was an abusive alcoholic, from 1941 until their divorce in 1953.

Musing about what made her a star, O’Hara wrote: “I have always believed my most compelling quality to be my inner strength, something I am easily able to share with an audience. I’m very comfortable in my own skin. I never thought my looks would have anything to do with becoming a star. Yet it seems that in some ways they did.”

Michael J. Sonntag is a stage & screen producer, casting director, and acting coach living and working in Los Angeles, CA. In addition to owning and co-founding Studio C Artists, Michael is the President & CEO of the non-profit, One World Stage & Screen. He lives with his family in the thriving West Adams neighborhood, and enjoys his volunteer work as a community organizer.

My Tweets
Join 2,250 other subscribers